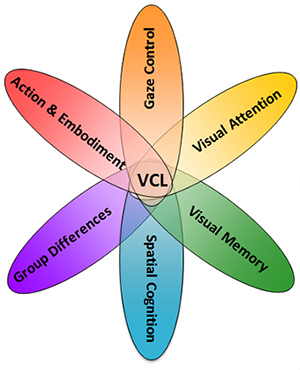 As observers, we cannot obtain all the information from the visual world that we may need to complete some task from a single glance. The complexity of the environment, combined with physiological limitations on visual acuity and cognitive limitations on the capacity of attention and memory, force us to shift our attention, gaze, and bodies from place to place, both to new locations and to previously visited ones, as we investigate our visual surroundings. The serial nature of visual exploration poses several important challenges to observers as they confront their visual surroundings. In terms of attention processes, from the seemingly infinite amount of information in a scene, observers must appropriately select the small subset of information relevant for completing a given task. In terms of memory processes, selected information has to be retained in memory and used in conjunction with information obtained later in viewing—in some cases milliseconds and in other cases days—to enable coordinated action within the visual world. Broadly, research in the Visual Cognition Lab at Notre Dame aims to elucidate how information is selected for encoding, how visual stimuli are represented in memory, and how stored knowledge about the visual world in turn guides behavior. Specific interest include:

The Visual Cognition Lab therefore sits at the intersection of research on visual attention, visual memory, gaze control, spatial cognition, embodied cognition, and cognitive ageing. Each of these interrelated issues is central to understanding how observers construct and use meaningful mental representations of visual environments despite their perceptual and cognitive limitations.